Early Life of Justinian The Great

In 482 AD, Justinian was born the country now called Bulgaria.

His father was a Shepherd.

About sixteen years of age, left his mountain home in that country to go to the far away city of Constantinople.

The boy had no money to pay the expenses of the journey. However he was determined to go to Constantinople.

Some years before, this boy’s uncle, called Justin, had gone to Constantinople. Later he joined the Roman army.

Brave Justinian soon came to be commander of the imperial guard which attended the emperor.

The poor Justinian had heard of the success of his uncle, and wanted to join him.

He undertook a difficult and dangerous journey. However in midsummer he walked through the main gate of Constantinople.

He had no trouble in finding his Uncle Justin. Everybody in Constantinople knew the commander of the emperor’s guards.

Soon Justinian appeared at the great his uncle’s house. His uncle received him with much kindness.

He took him into his own family, and gave him the best education that could be had in the city.

As the boy, talented Justinian soon became an excellent scholar.

He grew up a tall, good-looking man, with black eyes and curly hair.

People in the emperor’s court respected him on account of his learning.

One day a great change came for both uncle and nephew.

The emperor died; and the people chose Justin to succeed him.

He took the title of Justinus I, and so the young scholar, who had once been a poor shepherd boy, now became the nephew of an emperor.

After some years, noble of Justinus advised him to by his nobles to take the young man, who had adopted the name of Justinian, to help him in ruling the empire.

Old and enfeeble, Justinus agreed to this proposal as he lacked strength to attend to the important affairs of government.

He therefore called the great lords of his court together and in their presence he placed a crown on the head of his nephew, who thus became joint emperor with his uncle.

In 527, his uncle died, and then Justinian became emperor.

Justinian reigned for nearly forty years. He did so many important things that people called him Justinian the Great. 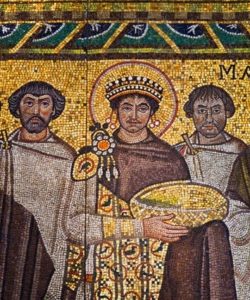 Justinian the GreatHe had many wars during his reign, but he himself did not take part in them.

Lacking experienced as a soldier, Justinian spent most of his time in study.

Fortunately, Justinian has two great generals to lead his armies.

One of them was named Belisarius and the other Narses.

Belisarius was one of the greatest soldiers that ever lived.

He gained wonderful victories for Justinian, and conquered some of the old Roman provinces that had been lost for many years.

The victories of these two generals largely helped to make the reign of Justinian remarkable in history.

Many years before he ascended the throne the Vandals, conquered the northern part of Africa.

They established a kingdom there with Carthage as its capital.

Justinian resolved to make war on this king in order to recover Northern Africa and make it again a part of the Empire.

So, Justinian sent Belisarius to Africa with an army of thirty-five thousand men and five thousand horses on a fleet of six hundred ships.

It took this fleet three months to make the voyage from Constantinople to Africa.

The people received him in a friendly way, for they had grown tired of the rule of the Vandals.

They preferred to be under the government of the Romans.

About ten miles from Carthage he met a large Vandal army under brother of Gelimer.

Justinian killed Gelimer’s brother which caused the Vandal king to fled from the field.

Belisarius then proceeded to Carthage and took possession of the city.

Soon afterwards Gelimer collected another army and fought the Romans in another battle, twenty miles from Carthage.

Belisarius again defeated him and the Vandal king again fled.

This was the end of the Vandal king in Africa.

In a short time Gelimer gave himself up to Belisarius, who took him to Constantinople.

Justinian set apart an estate for him to live upon, and the conquered king passed the rest of his life in peaceful retirement.

Justinian put a large army together and ordered Belisarius and Narses immediately set out for Italy.

When they arrived there they marched straight to Rome, and after some fighting took possession of the city.

But in a few months, Vitiges, king of the Goths, appeared with an army before the gates.

He challenged Belisarius and Narses to come out and fight.

The Roman generals, however, were not then ready to fight,and so the Ostrogoth king laid siege to the city, thinking that he would compel the Romans to surrender.

But instead of having any thought of surrender, Belisarius prepared his men for fight. When they were ready he attacked Vitiges and defeated him.

Vitiges retired to Ravenna, and Belisarius quickly followed. He compelled him to surrender through an assault on the city.

He captured the Ostrogoth army, and took Vitiges to Constantinople a prisoner.

Belisarius and Narses then went to Northern Italy, and, after a long war,conquered all the tribes there.

Thus Justinian established his power throughout the whole country. The city of Rome was again under the dominion of a Roman emperor.

While his brave generals were winning these victories for the Empire, Justinian made improvements of various kinds at the capital.

He erected great public buildings, which were not only useful but ornamental to the city.

The most remarkable of them was the very magnificent cathedral of St. Sophia, for a longtime the grandest church structure in the world.

The great temple still exists in all its beauty andgrandeur, but is now used as a Mohammedan mosque.

But the most important thing that Justinian did was the improving and collecting of the laws.

He made many excellent new laws and reformed many of the old laws.

People called him as one of the greatest of the world’s legislators.

For a long time people found the Roman laws difficult to understand.

There was a vast number of them. The different writers differed widely as  what they meant.

Historian later called his collection the Code of Justinian.

It still exists, and is the model according to which most of the countries of Europe have made their laws.

Justinian also established a number of manufactures in Constantinople.

He brought silk-worms into Europe to establish its production facilities.

To the last year of his life Justinian was strong and active and a hard worker.

He often worked or studied all day and all night without eating or sleeping.

He died in 565 at the age of eighty-three years.