Muhammad Ghori was the member of ruling house of Ghor in west- central part of modern Afghanistan.

His Brother Sultan Ghiyas-ud-din of house of Ghor, invaded and conquered Ghazni in 1173 AD.

He installed his younger brother  Muhammad Ghori as the ruler of Ghazni.

The first Turks(Muslim) to invade and lay the foundation of Turkish(Muslim) rule in India was Sabuktagin and his eldest son Mahmud of Ghazni.

Abdul Qasim Mahmud also known as Mahmud of Ghazni became ruler of ghazni in 998 AD after death of his father.

Mahmud of Ghazni raided india seventeen times from 1000 to 1027.

He conquered the Punjab in 1022 and remained under the control of his successors till 1186.

The Ghaznavid empire disintegrated quickly after the death of Mahmud due to his incompetent successors.

Ghori started invasion of india in 1175. The sultan entered the indian subcontinent through the Gomal Pass in the Sulaiman Range. He has 2 reason for choosing Gomal Pass over Khyber Pass-

His first target was city of Multan, which he captured from local ruler. He next target was the city of Uch. He 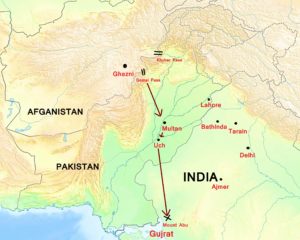 captured Unch without the fight as Queen of Uch killed her husband and negotiated with Ghori to marry her daughter in return for the city of Uch.

Sultan next crossed Thar desert to invade Gujarat. However Chalukya King of Mularaja II, raised the big army and met Muhammad in battlefield near Mount Abu. Mularaja easily defeated exhausted army of Muhammad. He beat the hasty retreated back to Ghazni along with remnants of his army.

After the defeat in battle of Mount Abu, Ghori changed his plan.

He now planned to first conquer Punjab. In 1179 AD, he race through Khyber Pass and captured Peshawar.

He garrisoned  Peshawar with strong force to protect Khyber Pass.

Khusrau Malik defended his capital with great courage but was forced to negotiate treaty with Ghori.

As a part of treaty, Khusrau Malik send his infant son as a hostage to Ghori to ensure compliance of treaty.

Next year(1182 AD), he attacked Sindh. He dashed across sindh and attacked Debal(capital of sindh).

Ruler of Sindh sued for peace and after negotiation, accepted to become vassal of sultan. 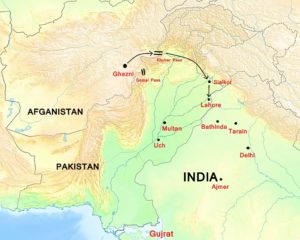 In 1185 AD, Ghori attacked northeast Punjab and conquer the city of Sialkot. Khusrau Malik along with Khokhars tribe attempted to reconquer the Sialkot as soon as Ghori returned to Afghanistan.

He again dashed through the Khyber Pass to assist his garrison of Sialkot. Khusrau Malik immediately raised the siege of Sialkot and retreated back to Lahore.

Khusrau Malik and his loyal troop bravely defended Lahore. Sultan wants to end the siege quickly, so he used treachery.

Sultan pretended to open dialogue with Khusrau Malik. Khusrau Malik came out of fort, immediately he was captured and imprisoned.

Leaderless forces of Khusrau Malik soon surrendered their fort. Ghaznavid dynasty ended after Khusrau Malik and his son were put to death in 1192. 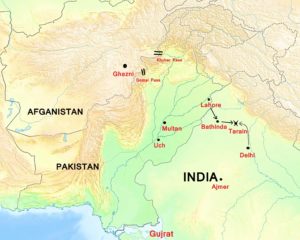 from Ghazni to meet the Rajput challenge. Both army met at the field of Tarain, 100 km north of Delhi. In ensuing battle, rajput completely destroyed turkish forces.  Govind Rai(younger brother of Prithvi Raj Chauhan) seriously injured Ghori. Ghori was rescued by alert Khalji Soldier and carried to Ghazni in litter. The Rajput immediately laid the siege to Bhatinda but it took them more than a year to recapture it.

Ghori learned from his mistake and raised much bigger army to avenge his defeat. He raised four divisions(10,000 troops per division) of mounted archers. In 1192 AD, he moved his forces directly to Tarain to defeat Rajput. Overconfident Prithvi Raj Chauhan came to battlefield with smaller forces as some division of Rajput forces were engaged elsewhere. Ghori used his cavalry archers to attack Rajput from all four sides to harass and exhaust them. Soon, Rajput were completely disorganised and exhausted. Sultan unleashed his well rested reserve on Rajput. Turks broke through the Rajput lines and completely destroyed them. Govind Rai died in the battlefiled. Prithvi Raj Chauhan ran away from battlefield but was caught and killed.

Rajput still hold the city of Delhi and Agra after being defeated in the battle of Tarain. Ghori appointed Qutub-ud-din Aibek as commander of his forces to capture delhi and returned to  Ghazni. Qutub-ud-din Aibek established army base at indraprastha, 10 km east of Delhi. Aibek laid the siege of Delhi and forced Rajput to vacate the fort. 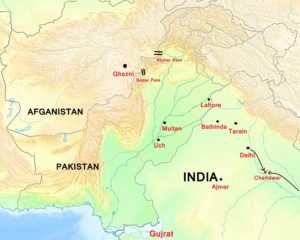 In 1193 AD, Ghori attacked kingdom of Kanauj. He defeated and killed Jaychandra of Gahadalava Dynasty in battle of Chandwar. After conquering Kingdom of Kanauj, Ghori returned to Ghazni. He ruled his empire from Ghazni and left Aibek incharge of delhi.

In 1203, Ghori elder brother died and he assumed independent ruler of state. In 1205, shah of Khwarizm defeated Ghori in open battle. Soon after the defeat he heard that Khokhars tribe of salt range has revolted against him. He led army to support Aibek in his effort to crush Khokhar tribe. 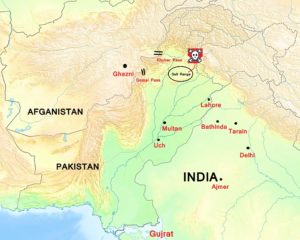 After the successful completion of campaign, in march 1206, Ghori was returning towards Ghazni. He pitched his tent on the bank of river Indus. Few daring Khokhars swim across the river and killed sultan in his tent. Thus ending the long and adventurous career of Ghori. Turkish Nobles divided his empire among themselves after his death.