Jahagir was heavy drinker and opium eater which slowly made him sick. In1627, Jahangir died after his health worsened due to severe cold in Kashmir.

Jahangir started drinking quite early in his life. When he became emperor he was already a heavy drinker.

Soon his drinking started to impact his health. Jahangir recognized the danger and decided to do something about it.

Jahangir consulted well known doctor Hakim Humam. Hakim Humam is the famous doctor who was accused by Emperor Akbar for conspiring to poison him.

The Hakim Humam told him that if in next six months things don’t change his health will be beyond remedy. This shocked Jahangir and he decided to make some changes to his lifestyle.

Slowly and steadily, Salim started to decrease his alcohol consumption. He also started using opium instead of alcohol which was less harmful for his health.  Also he started drinking diluted his alcohol with wine only in the evening.

How did Jahangir Died

By 1627, old age and heavy drinking has severely impacted Jahangir’s health, which forced him to visit cold places like Kashmir and Kabul in the hope of restoring his health. 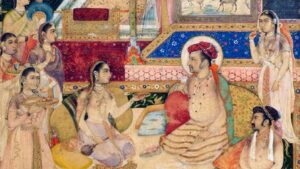 After one of his visit to Kashmir, severe cold weather forced the Jahangir  to return to Lahore as it was adversely impacting his health.

While returning from Kashmir along with his followers, Jahangir died on October 28, 1627, at Sarai Saadabad in Bhimber.

After preserving his dead body, his followers temporarily buried his body in Baghsar Fort. Later they moved his body to Shahdara Bagh in Lahore.

Currently his tomb, which is located at Shahdara, is a major tourist attraction in present-day Lahore.