Bolywood Legend Lata Mangeshkar was born on 28 September 1929. She is 90 years old.

Her father, Pandit Deenanath Mangeshkar, was a classical singer and theatre actor.

The family’s last name used to be Hardikar; Deenanath changed it to Mangeshkar in order to identify his family with his native town, Mangeshi in Goa. Her parent named Lata as “Hema” at her birth. 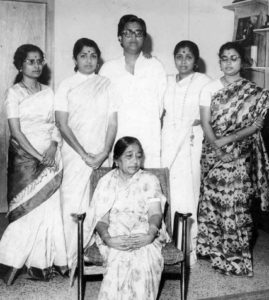 Mangeshkar received her first music lesson from her father. At the age of five, she started to work as an actress in her father’s musical plays (Sangeet Natak in Marathi).

On the first day in school, she started teaching songs to other children. When the teacher stopped her, she was so angry that she stopped going to the school.

Other sources cite that she left school because they would not allow her to bring Asha with her, as she would often bring her younger sister with her.

In 1942, when Mangeshkar was 13, her father died of heart disease. Master Vinayak (Vinayak Damodar Karnataki), the owner of Navyug Chitrapat movie company and a close friend of the Mangeshkar family, took care of them.

He helped Lata get started in a career as a singer and actress. Her first Hindi song was “Mata Ek Sapoot Ki Duniya Badal De Tu” for the Marathi film Gajaabhaau(1943).

Mangeshkar moved to Mumbai in 1945 when Master Vinayak’s company moved its headquarters there. She started taking lessons in Hindustani classical music from Ustad Aman Ali Khan of Bhendibazaar Gharana.

After Vinayak’s death in 1948, music director Ghulam Haider mentored her as a singer. He introduced Mangeshkar to producer Sashadhar Mukherjee, who was working then on the movie Shaheed (1948).

Initially, Mangeshkar imitated the acclaimed singer Noor Jehan, but later she developed her own style of singing.

In early 1962, someone gave Mangeshkar slow poison. A doctor was called. For three days, she had a close brush with death. After ten days, she began to recover. Later the doctor told her that somebody had given her slow poison.

The slow poison incident rendered her very weak. She was bedridden for nearly 3 months. The most surprising thing was that soon after the incident, the cook who used to work at Lata’s home, suddenly vanished without taking his wages.

In 1999, Lata Eau de Parfum, a perfume brand named after her, was launched.

In 1999, Mangeshkar was nominated as a member of Rajya Sabha. However, she did not attend the Rajya Sabha sessions regularly, inviting criticism from several members of the House.

She stated the reason for her absence as ill-health; it was also reported that she had not taken a salary, allowance or a house in Delhi for being a Member of Parliament.

On 27 January 1963, against the backdrop of the Sino-Indian War, Mangeshkar sang the patriotic song “Aye Mere Watan Ke Logo” (literally, “Oh, People of My Country”) in the presence of Jawaharlal Nehru, then the Prime Minister of India.

In 1973, she won the National Film Award for Best Female Playback Singer for the song “Beeti Na Bitai” from the film Parichay. In 1975, she again won the national award, this time for the song “Roothe Roothe Piya” from the film Kora Kagaz, composed by Kalyanji Anandji.

From the 1970s onwards, Lata Mangeshkar has also staged many concerts in India and abroad, including several charity concerts. Her first concert overseas was at the Royal Albert Hall, London, in 1974 and was the first Indian to do so.

In the late 1970s and early 1980s, she worked with the children of composers she had earlier worked with.

Later Government of India bestowed the Dadasaheb Phalke Award on her in 1989. In 2001, in recognition of her contributions to the nation, government awarded her the Bharat Ratna, India’s highest civilian honour.

She is only the second vocalist, after M. S. Subbulakshmi, to receive this honour. France conferred on her its highest civilian award (Officer of the Legion of Honour) in 2007.

In 1974, she became the first Indian to perform in the Royal Albert Hall.

In 2001, she established the Master Deenanath Mangeshkar Hospital in Pune, managed by the Lata Mangeshkar Medical Foundation (founded by the Mangeshkar family in October 1989).

She remained unmarried throughout her life.

As she remained unmarried throughout her life so she don’t have any children.

In December 2018, there were reports that Lata Mangeshkar is suffering from ill health and has been hospitalised. However, the 89-year-old singer today took to Twitter to slam all rumours.

Lata Mangeshkar posted a tweet on her account, which could be translated in English to be read as, “Namaskar. Certain rumours about my health have been doing the rounds, but please don’t believe them. I’m absolutely healthy and at home.”

It was not really the external influences that made me a singer. Music was within me. I was full of it.

When I speak, my Urdu isn’t very good but when I sing I make sure there are no flaws in my diction.

People should be blessed in life with friends who are both “Mirrors & Shadows”! Mirrors don’t lie & shadows never leave.