Bollywood legend Dev Anand was born Dharam Dev Anand on 26 September 1923 in the Shakargarh tehsil of the Gurdaspur district in Punjab (British India).

His father Pishori Lal Anand was a well-to-do advocate in Gurdaspur District Court. Dev was the third of four sons born to Anand. One of Dev’s younger sisters is Sheel Kanta Kapur, who is the mother of film director Shekhar Kapur.

His older brothers were Manmohan Anand (Advocate, Gurdaspur Dist. Court) and Chetan Anand and the younger one was Vijay Anand.

He did his schooling till matriculation from Sacred Heart School, Dalhousie, (then in Punjab) and went to Government college Dharamshala before going to Lahore to study.

Part of the Anand family, he co-founded Navketan Films in 1949 with his elder brother Chetan Anand. 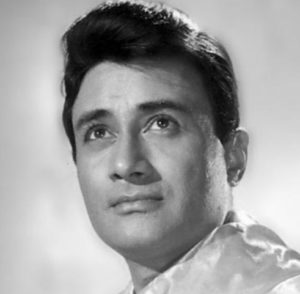 After completing his BA degree in English Literature from the Government College, Lahore (then in British India, now in Pakistan), he left his home-town for Bombay in the early 1940s.

He began his career in the military censor’s office at Churchgate, for a monthly salary of Rs. 65. Later, he worked as a clerk in an accounting firm for a salary of Rs. 85.

He joined his older brother, Chetan, as a member of the Indian People’s Theatre Association (IPTA).

He aspired to become a performer after seeing Ashok Kumar’s performance in films such as Achhut Kanya and Kismet.

In the late 1940s, Anand was offered a few roles starring as the male lead opposite singer-actress Suraiya in woman-oriented films. While shooting these films, they became romantically involved.

Soon Prabhat Films offered him the lead role in  Hum Ek Hain (1946), a film about Hindu-Muslim unity, where he played a Hindu boy and opposite to Kamala Kotnis.

Anand was offered his first big break by Ashok Kumar. He spotted Anand hanging around in the studios and picked him as the hero for the Bombay Talkies production Ziddi (1948), co-starring Kamini Kaushal, which became an instant success.

After Ziddi’s success, Anand decided that he would start producing films.

While shooting the film in Pune, Anand befriended the actor Guru Dutt. Between them, they agreed that if one of them were to become successful in the film industry, he would help the other also to be successful.

They formed a mutual understanding that when Anand produced a film, Dutt would direct it and when Dutt directed a film, Anand would act in it.

A rapid-fire style of dialogue delivery and a penchant for nodding while speaking became Dev’s style in films.

In the sixties, he acquired a romantic image with films such as Manzil and Tere Ghar Ke Samne with Nutan.

His directorial debut, the espionage drama Prem Pujari, was a flop but has developed a cult following over the years. The film introduced Zaheeda and had Waheeda Rehman as the lead female artiste.

He tasted success with his 1971 directorial effort, Hare Rama Hare Krishna which talked about the prevalent hippie culture.

The 1978 hit Des Pardes, directed by Dev Anand was the debut movie of actress Tina Munim and this film’s success gave him the tag of the Evergreen Hero.

Dev Anand directed Chargesheet, a Bollywood Crime thriller and released on 30 September 2011. It was his last work before he died on 3 December 2011.

Suneil Anand (born 30 June 1956) is an Indian film actor and director. He is the son of former actors Dev Anand and Kalpana Kartik. He is currently involved in running Navketan Films.

Though Dev Anand’s demand as the lead hero had not decreased even in the 1980s, he decided that it was the right time to introduce his son Suneil Anand in films as the hero.

He launched his son in the Kramer vs Kramer inspired Anand Aur Anand (1984). He produced and directed this movie  himself and R.D. Burman made music for this movie.

He expected the film to do well, but the film was a box office disaster and Suneil Anand decided not to act in films anymore.

Kalpana Kartik is the wife of Dev Anand. In 1954, Kalpana and Dev Anand got married secretly while on a break during the shooting of Taxi Driver. They became parents in 1956 when Suneil Anand was born.

They also have a daughter named Devina. After Nau Do Gyarah, Kalpana quit films to become a home maker.

He was the recipient of the Filmfare Award for Best Actor for his performances in Kala Pani and Guide, the latter being India’s official entry to the Oscars.

His daughter Devina is married and has a daughter. She has never acted in or directed a film.

Anand was reportedly in London for a medical checkup at the time of his death.

On 10 December, his family held his funeral service at a small chapel in London after which they took his casket to the Putney Vale Crematorium in southwest London.

His ashes were returned to India for immersion burial in the Godavari River.