Chand Bibi has a strong family background as she was daughter of Sultan of Ahmednagar and wife of Sultan of Bijapur. 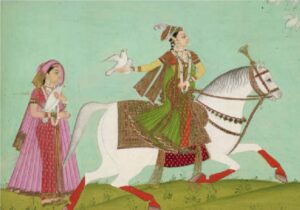 When she was just teenager she was married to Sultan Ali Adil Shah of Bijapur. This marriage strengthen  military alliance between Ahmednagar and Bijapur against the kingdom of Vijaynagar.

Her husband Sultan of bijapur constructed stepwell (bawdi) in Bijapur. It was named Chand Bawdi after her.

As a queen of bijapur, she accompanying her husband in his military campaign. She made valuable contribution in running and improving administration of bijapur.

As she didn’t have any children, so her nine-year-old nephew Ibrahim Adil Shah II became ruler of bijapur. She became regent of new sultan till he grow up.

She speak many languages including Arabic, Persian, Turkish, Marathi and Kannada.

She was a very good player of sitar. Her hobby also include painting flowers.

Chand Bibi is best known for defending Ahmednagar against the Mughal forces of Emperor Akbar in 1595.

She was also interested in sporting activities such as horse riding and hawking.

Beyond all this, Chand bibi was gifted with strategically mind and military shrewdness allowed her to flourish and give tough time to mughal army.