Maulana Abul Kalam Azad was born on 11 November 1888 in Mecca, Saudi Arabia to Maulana Khairuddin. His Father was a Bengali Muslim from Afghanistan. 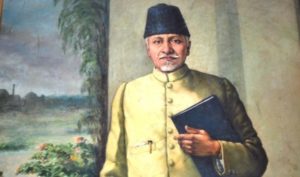 He belonged to an orthodox family. So, he pursued traditional Islamic education at home in Kolkata but secretly learned English.

The parents of Azad initially trained him to become a clergyman(Ulema). He wrote numerous books, reinterpreting the holy Quran.

He was married to a young Muslim girl, Zulaikha Begum at the age of 13.

In October 1920, Maulana Abul Kalam Azad was instrumental in establish Jamia Millia Islamia at Aligarh in U. P. without taking help from British colonial government. He helped a lot in shifting of the campus of the university to New Delhi from Aligarh in 1934.

He formed the Nationalist Muslim Party within the Indian National Congress. He protested against the Muslim League’s claim that it represented all Muslims in British India.

Member of party elected him as president of the Indian National Congress on two occasions, in 1924 and 1940.

He served as Congress president from 1940 to 1945. Under his leadership the Quit India rebellion was launched. Azad was imprisoned, together with the entire Congress leadership.

In 1923, at an age of 35, he became the youngest person to serve as the President of the Indian National Congress.

In 1992, Government of India awarded Azad with Bharat Ratna posthumously for his indispensable and extremely valuable contribution to India.

He passed away on 22 February 1958 in New Delhi. Azad’s tomb is located next to the Jama Masjid in Delhi.

Maulana Abul Kalam’s pen name was Azad.  His adopted name signify that he was free from the marginal views of religion and life.

People considered Maulana Azad as one of the greatest Urdu writers of the 20th century. He has written many books including India Wins Freedom.

His birth name was Feroz Bakht.

Maulana Azad National Urdu University is  located in the city of Hyderabad.

He served as the first Education Minister of independent India

He was well versed in many languages including Arabic, English, Urdu, Hindi and Persian.